Dudley Hackling is a recycling operative and curb side collector for the Bristol Waste Company, and a rep for UNISON.

I signed up to the union almost straight away.

Bristol Waste was about 60 or 70% unionised when I joined, so it was normal to do that. About four years ago, two reps left and the remaining one said to me, “You’d make a good rep”. I was like, “Yeah, but I don’t really want to do it”. But no-one else was going to, so I stepped up.

I seem to have fallen into the role quite well.

I think that’s down to my communication skills and the training I’ve received. The basic reps’ training was the first course I did. It was fantastic and I met some great people. I also did the Return to Learn – going over the basics like English, maths and computers. It wasn’t that I couldn’t do those things, it was about boosting my confidence. 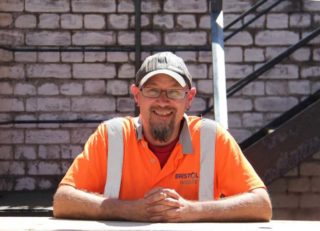 A couple of years ago, I won an award

Best Steward in the South West. It was amazing, I wasn’t expecting it. I won because membership at Bristol Waste had been dropping off, and I did a massive membership drive and got it up to about 90%.

At 90% membership, we were able to get a good deal – for pay and conditions.

In my area, the bin men are paid more than the recycling men. Last year, we managed to get a two-year deal for recycling loaders to get a 5% pay rise – everyone else got 1.5%. That sounds like a big difference, but we’re still just catching up with the bin men. We’re trying to get pay parity across the board.

Two weeks at full pay and two weeks at half pay. Hopefully, this year we can push it up to four weeks on full pay. And on holiday, we negotiated for everyone to have a minimum of 25 days off, plus bank holidays – up from 20 days. It’s much fairer now.

The main thing about being a rep is about confidence.

It’s about being able to approach management with confidence. The other big thing is listening – listening to the members, no matter what their complaint is. So yes, a lot of listening and a lot of talking!

I’m optimistic about the future.

We have regular meetings with management –sometimes twice a month. It’s great dialogue – they don’t just tell us what they’re doing, it feels more like a consultation. For example, they’re updating the disciplinary policy at the moment, and they asked us to review it before it comes into practice.