Gladys Branche is a heroine of Sierra Leone’s trade union movement. What did she do to gain that status?

She picketed the college dining hall

In 1984 Gladys was at teacher training college in northern Sierra Leone. Each day she headed to the college dining hall for breakfast, lunch and dinner. But the food wasn’t good. Gladys and her fellow trainees complained to the principal, who was unimpressed. “She called an assembly, getting us on stage to name and shame us,” says Gladys. “She called us ‘the college trouble makers’.” The ‘trouble makers’ made an official protest and ultimately won their fight for decent meals. “Everyone came to my dorm saying ‘Bravo, Gladys!’ They started talking to me about other issues, like lecturers turning up late to class. I realised that by speaking up, I could change situations and give people hope. That’s where it all started.” 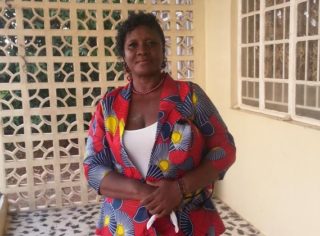 She made a splash in her union

Gladys got her first teaching job and discovered more challenges: late payment, no teaching materials, unqualified staff. One day a group from the teachers’ union showed up. “When I found out what a union was, I said, ‘Wow, this is good! I want to be part of you!’” The next month Gladys attended the teachers’ union conference. Delegates encouraged her to become the union rep for her district – and her trade union career began. She spread the word in schools, spoke out on the radio and was part of delegations that took teachers’ concerns to the government.

She wondered: where are all the women?

Representing the teachers’ union at the Sierra Leone Labour Congress (SLLC), Gladys noticed something. “Women weren’t participating. All 21 unions of the SLLC were made up of men. There were no women in leadership positions. I began to ask questions.” Gladys discovered that trade unionists often ended up in prison. “So women stayed at the back. They didn’t want to go to jail.” Gladys became the secretary of the SLLC women’s committee and started attending TUC-funded workshops on women’s empowerment. In 2003, Gladys won a TUC scholarship to study at Ruskin College in Oxford.

She found the women and she turned them into leaders

After Oxford, Gladys returned home and made a proposal to the SLLC: she wanted to help every union in Sierra Leone form a women’s committee. They agreed. Gladys organised women workers in the health hotel and bank sectors. She highlighted the importance of unions and the need to speak up for fair pay and terms and conditions. Unions redrafted their constitutions, making them more gender aware. Wording about presidents now referred to ‘He / She’ rather than just ‘He’. “Now, we have two women who are presidents and one woman who is secretary general,” says Gladys. “We are getting there!”

Gladys is now chair of the International Trade Union Confederation’s Women’s Committee, a position she takes great pride in. She has just returned from the World Women’s Conference in Costa Rica where she participated in debates about the least-respected women workers in the world – women who make up the ‘informal economy’, such as street vendors. “In Sierra Leone, we are training these women in skills like book keeping and highlighting how they are contributing to our economy,” says Gladys. “To hear the same things are going on around the world gave me joy. It keeps me going!”