Many Grunwick workers – Jayaben Desai among them – had been part of well-off South Asian communities in the British colonies of Tanzania, Kenya and Uganda. When those countries became independent, South Asians faced discrimination and many chose – or were forced – to leave. They arrived in England with few prospects and took whatever work they could find. Grunwick took advantage of this. Pay was low and so was management’s respect for the workers. They even had to ask for permission to use the toilet. 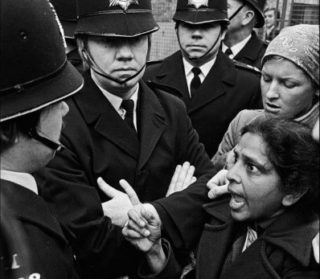 The strike leader reveals her roar

Mrs Desai made history by leading a walkout on 20 August 1976. According to MP Jack Dromey, Mrs Desai was a “lioness”. This description was probably inspired by what the 4’10” Mrs Desai had told 6ft Grunwick manager Malcom Alden: “What you are running here is not a factory, it is a zoo. In a zoo, there are many types of animals. Some are monkeys who dance on your fingertips, others are lions who can bite your head off. We are those lions, Mr Manager.”

Mrs Desai and her fellow strikers joined APEX (the Association of Professional, Executive, Clerical and Computer Staff) and demanded that Grunwick recognise their union. Their bosses responded by sacking them.

Posties take the side of the lions…

Grunwick was a mail-order company, so bosses were furious when the Union of Post Office Workers boycotted their mail. Thanks to Mrs Desai’s dynamic leadership, support for the Grunwick strikers was huge – by June 1977 over 20,000 people were joining them on the streets of Willesden. Police presence was strong and increasingly aggressive.

Apparently Thatcher, then opposition leader, called Grunwick boss George Ward “a champion of freedom”. A Labour government inquiry recommended that the Grunwick bosses should recognise the trade union and give the workers their jobs back. But Grunwick wouldn’t back down and the House of Lords upheld the company’s right not to recognise the union. With support faltering, the strike was called off on 14 July 1978.

Mrs Desai and the Grunwick strikers had shattered the stereotype of the subservient South Asian woman and brought thousands of people together to stand up for migrant workers. At the last strike meeting, Mrs Desai urged her comrades to feel proud. “We have shown,” she said, “that workers like us, new to these shores, will never accept being treated without dignity or respect.”